港大超环保LED路灯
Lighting up LED technology. Technology to illuminate the outdoors


For more than a decade, Professor Shu Yuen Ron Hui, chair of Power Electronics and holder of the Philip K H Wong Wilson K L Wong Professorship in Electrical Engineering at the University of Hong Kong (HKU), and his research team have focused on the research and development of power electronics for light-emitting diode (LED) applications.

Conventional active LED drivers have proven unsuitable for outdoor street lighting and with the industry looking for a LED driver with a lifespan comparable to LED devices, Hui and his team invented a passive LED driver.

Comprising less than a dozen components that are mainly inductors and non-electrolytic capacitors, the key to the invention lies in its simplicity; the straightforwardness of the constituent components is what gives the passive LED driver its edge.

With a lifespan of more than 15 years, the passive LED driver can operate with high-energy efficiency under extreme weather conditions, including subzero temperatures, thunder, lighting and wide temperature variations. More than 80 percent of the driver’s components can be recycled.

By contrast, a conventional active LED driver’s limiting factors include a shorter lifespan and less versatility, and the electrolyte inside an active LED driver capacitor freezes in subzero temperatures.

The technology has enough promise for a strong impact — in the Chinese mainland alone there are 180 million streetlights. The technology has been licensed to a tech company in Hong Kong. Following a successful initial trial run earlier this year in Heshan city, Guangdong, the company is now partnering with a listed firm to manufacture the new LED street lighting products on a mass scale for a larger trial run in the same city this summer, with plans for the new LED street lighting products to become available on the market in 2016.

Hui’s inventions, which focus on new and ground breaking technologies, are part of HKU’s portfolio of technologies, many of which are available for industry transfer. “Turning technology into something that is useful to society is the priority and our main objective. A financial element is of course a benefit,” says Paul Cheung, director of the Technology Transfer Office (TTO) and a professor in the Department of Electrical and Electronic Engineering at HKU.

Cheung believes that platforms such as the Asia IP Exchange (AsiaIPEX), Asia’s largest international online IP portal, of which HKU is a partner, are beneficial in helping technologies reach broader audiences, especially for Hong Kong inventors looking to venture outside of the city.

“Hong Kong is a small market and we really need to put together our eff orts and resources to go beyond Hong Kong,” Cheung says. “Platforms (such as AsiaIPEX) that link potential users with technologies are going to be very important and useful.”

Calling the technology transfer process one of “discovery”, Cheung says the TTO concentrates on connecting HKU researchers with industry and engages in “cradle-to-grave” follow-up.

“Our primary focus is on high impact research. At the TTO, we regularly give talks and seminars to remind our researchers that their research is beneficial to society. There is a gap between the initial research and its commercialization, and even technology with a potentially big impact can get lost unless the researchers partner with us to help transfer the technology to industry.”

Hui has since shifted focus and developed an electric spring technology that embraces renewable energy.

“There needs to be a balance between the power generated and the power demand,” Hui says. “When there is a large increase in renewable energies such as solar and wind power, the balance is unstable so we needed to solve the problem in order to increase wind and solar power.”

The idea for an electric spring came during a sleepless night when Hui was trying to solve the problem. That sleepless night inspired him to think of his bed’s mattress and the individual springs that function both separately and as a whole.

“The mattress is a stable system and the weight is distributed evenly on the springs,” Hui says. “If some of the springs fail, the weight is still distributed and so I thought if I could make an electric version that would solve the stability problem.” Hui did indeed develop an electric spring that is now available for commercialization, but says that for the system to be implemented there would need to be government involvement and regulation.

“We now need a financial model that works to apply this technology,” Hui says. “One thing I’ve learned is that it’s very important for the financial model to work with the technology during the tech transfer process and in this case, where we would be looking at cities to adopt the electric spring, we would need regulatory and government support.” 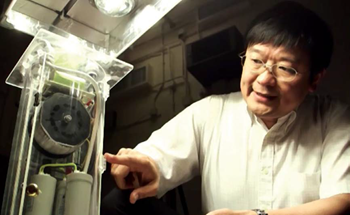 Professor S Y Ron Hui showcases his LED invention prototype, which had a successful trial run in Heshan city, Guangdong province, earlier this year. The product is planned to be on the market in 2016. 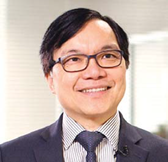 Professor Paul Cheung believes platforms such as the Asia IP Exchange, of which HKU is a partner, are beneficial in helping technologies reach broader audiences.