In 2010, a team from The Chinese University of Hong Kong (CUHK) saw an opportunity to reduce the complexity of network coding, improving upon overall network transmission rates while minimizing data loss. Three years later, Prof Yang Shenghao and Prof Raymond Yeung Wai-ho, who is also a codirector of the Institute of Network Coding (INC), had created the first real system ready for demonstration.

Partially inspired by “fountain code”, a low-complexity erasure correction code, the team created what is now known as BATS code (BATched Sparse code), which, in contrast to traditional store-and-forward methods, as data is delivered, generates new packets to compensate network loss, while at the same time improving the throughput.

“It’s not just a direct route from origin to destination,” Yeung said. “And unlike the analogy of public transportation, in network coding, we have more flexibility to modify the data packets to benefit network communications.”

The efficiency of BATS code has made it a technology with huge market potential and a wireless multihop network transmission protocol has been built using the code. Because BATS code generates and transmits new data packets in the relay nodes to compensate for packet loss, the code is a good approach for realizing networks that require one or more relay nodes to connect from the source node to the destination node.

A network with two relays and a 20 per cent loss per link, for example, can, when using BATS code, have an increased transmission by 56 per cent and a reduction in the loss rate by 29 per cent.

BATS code has been successfully demonstrated in a wireless multihop network for both fi le transmission and video streaming and is now ready for commercialisation. Yeung sees potential users in companies that require multi-hop relay technologies in wireless networks, such as wireless network equipment vendors and wireless chipset vendors. Additional applications include 5G/ WiFi wireless communications, satellite communications, Internet of Things and wireless sensor and mesh networks. Yeung stressed that with further research, there is also potential to deploy BATS code in content distribution systems involving both wireless and wireline networks, with potential users including both video streaming and CDN (content delivery network) providers.

“BATS code can in general improve network communication experiences,” Yeung said. “For example, BATS makes it easier to increase the coverage and throughput of 5G/ WiFi networks by means of relays. In a disaster recovery scenario, BATS can connect multiple wireless communication devices, such as mobile phones and wireless sensors, to deliver information to tens and hundreds miles away without the support of a fixed communication infrastructure.”

To support the research in network coding, INC received from the Hong Kong SAR Government’s University Grants Committee in 2010 with a matching grant from CUHK to provide them with funding support of more than HK$100 million ($12.9 million) spread over eight years, from 2010 through 2017. In order to develop its technology, the BATS team received an Innovation Technology Fund from the Hong Kong SAR Government of HK$1 million, from 2012 to 2013. Now, BATS is looking to take this technology to the next level, with the Asia IP Exchange (AsiaIPEX) helping to spread the word.

“BATS has already obtained and applied for a number of patents in different countries and currently we are working with the Office of Research and Knowledge Transfer Services (ORKTS) at CUHK for promotion,” Yeung said. “We are also interested in working with portals such as AsiaIPEX.”

“We work closely with our network of industrial partners on commercialization and actively participate in different trade shows and conventions. Also, we use new technology platforms, such as the AsiaIPEX platform, to promote CUHK’s technologies to a wider audience globally.”

Being a part of AsiaIPEX — the region’s largest, free intellectual property portal — is one of the key components for ORKTS marketing strategy.

“Being a partner of AsiaIPEX is very important to our operations,” Tsoi said. “The portal allows us to reach out to more potential investors and companies. The global span of AsiaIPEX is limitless, and that is why CUHK actively works with the Hong Kong Trade Development Council to list our technologies on the platform.” 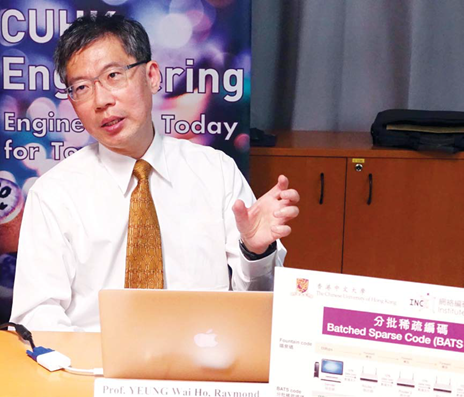