In Hong Kong, City University’s Knowledge Transfer Office has developed several programs to help its technologies reach potential buyers. One such technology is a universal USB charger that charges not only smartphones and tablets, but laptop computers as well, through an ordinary USB outlet.

“CityU’s approach to technology transfer is similar to other universities,” said the director of the Knowledge Transfer Office, David Ai. “As a university, our top priority is how the university can benefit society and that our technologies are well deployed and widely used. The second priority is to try and generate a return on investment.”

To develop opportunities on the Chinese mainland, CityU has developed a program to work with regional governments. The program helps train people to analyze demand for advanced technologies and then give feedback to CityU in hopes of matching the university’s technologies with market demands.

CityU is currently working with governments in Shenzhen and in Chengdu, and Ai said they had seen “very good success” rates thus far. “We’re trying to establish this model and then once it’s established, we can propose a complete service model with training, staffing and communication paths,” Ai said. “We’re looking to complete this model within the next year and then market it aggressively.”

Ai said every biotech company has a licensing office that is active in both licensing and out-licensing, and biotech conferences are full of buyers and sellers of technology.

Other industries, such as computers or the physical sciences, are more vertically integrated, whereas in the biotech industry you hardly need marketing sometimes, because the players are always looking toward tech transfer as part of their development.

“This attitude is something we’re trying to spread into companies in Hong Kong and on the Chinese mainland - to start integrating technology transfer early on,” said Ai.

Like many universities, there is a balance between technologies developed specifically for industrialization and commercialization purposes and those that address a problem more theoretically. Ai said many CityU researchers who are interested in developing commercially viable technologies are knowledgeable about the tech transfer process.

One such recent technology, Universal USB Power Supply with Intelligent Supply Voltage, which is listed on AsiaIPEX, was developed by Norman Tse, associate head and senior lecturer, Division of Building Science and Technology, and Henry Chung, director of the Centre for Smart Energy Conversion and Utilization Research and professor in the Department of Electronic Engineering.

The idea to develop the technology came from “real needs” that Tse and Chung saw CityU students experiencing. Students increasingly brought their own laptop computers to university for lectures along with smartphones and tablets. And while smartphones and tablets could be recharged via USB chargers or other small chargers, laptops required much bulkier equipment. Tse and Chung invented the Universal USB Power Supply with Intelligent Supply Voltage as a solution to, as Tse says, “relieve the carrying burdens of the students and the shortage of electric socket outlets”.

As they developed the technology, the biggest challenge they faced was one of compatibility. Power input requirements between laptops and USB electronic gadgets differ and different laptops also use different voltages. Several tests were carried out to create a single solution with Tse and Chung eventually developing an intelligent algorithm that automatically adjusts the voltage outputs.

“Combining the hardware and the intelligent firmware, the intelligent USB power supply is capable of identifying small differences in the loading characteristics of various types of devices such as laptops and smartphones,” Tse said.

The USB power supply is regulated and monitored by a microcontroller, while the intelligent algorithm protects the power supply from abnormalities or fault. A fuse is another passive over-current protection measure. 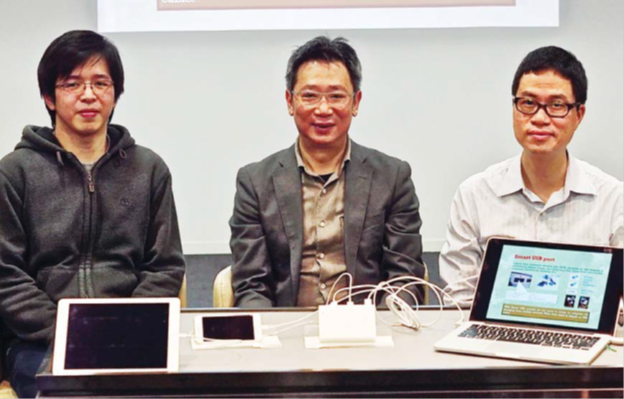 Inventors of the Universal USB Power Supply with Intelligent Supply Voltage (from left), John Chan, Norman Tse and Henry Chung. The technology allows laptops and tablets to be charged through an ordinary USB outlet. 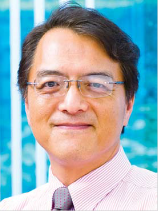