While a fierce competition is underway between Hong Kong and cities such as Singapore, Beijing, Shanghai and Guangzhou to become the licensing and creative hub of Asia, the Asian Licensing Association (ALA) is working to ensure that Hong Kong is the region’s licensing center, by fostering the growth and expansion of the licensing, creative and innovative industries.

With creativity recognized as one of the crucial requirements for economic transformation, many cities are vying to be Asia’s hub. ALA aims to ensure Hong Kong is the region’s go-to location.

ALA founder Toby Chan says the ALA, a partner of the Asia IP Exchange (AsiaIPEX), the region’s largest international online platform with over 25,000 tradable IPs (www.asiaipex.com), wants to promote Hong Kong as the international licensing and creative platform.

“This platform provides practitioners with the ability to search different brands and licenses to create new business opportunities.”

“Hong Kong’s sound legal system and its simple and low tax (regime) advantage attract many companies to sign license and commercial contracts here,” Chan says. “These advantages make it easy to enter into the retail and license business in Hong Kong.” Chan adds that Hong Kong’s proximity to the Chinese mainland also presents another advantage to establishing Hong Kong as a creative IP hub.

“Apart from its geographical advantage, Hong Kong is the gateway for foreign brands who want to enter the fastest growing market in the world, the Chinese mainland,’’ he says.

“This happens for a number of reasons. Hong Kong brand and licensing experts are familiar with the Chinese culture and they have developed good and deep connections with their Chinese mainland partners.

“Therefore, Hong Kong makes sense as a hub to help introduce these international brands into the Chinese mainland.”

Chan says ALA would also promote Hong Kong brands overseas and help push brands from places such as Japan, Korea and Singapore into western markets.

He says licensing intellectual property was vital for economic transformation to an intellectual economy. The failure to grant licenses for brands or characters leads to a regressive environment of infringement.

The ALA was set up in 2011 in response to the changes in the Asian market and the demand on the Chinese mainland. “There was no organization which could line up all license or brands all over the world,” he says. “Therefore, we founded the ALA for people to search and approach worldwide license or brands through our association.”

He says prior to the ALA, only worldwide licensing companies had business in Hong Kong, and those companies were applying western regulations, culture and customs in the Asian market. In addition to facilitating licensing, the ALA also acted to ensure the Asian licensee or licensing agent was properly represented, which has become increasingly important as the Asian market expands.

Around 100 world-known trademarks from ALA members are now listed on AsiaIPEX, with the partnership aiming to increase the exposure of the trademarks to interested licensees.

An example of the ALA using licensing and IP to take a Hong Kong pop culture icon and build brand recognition is through its work with cartoon characters from McDull & Friends.

Chan says while cartoon characters McDull and McMug were famous in Hong Kong, it was difficult to promote them on the Chinese mainland before licensing the characters.

“By granting promotion licenses to large and famous corporations in different industries such as banking and fast food, McDull and McMug become well-known immediately on the Chinese mainland due to the overwhelming advertising and promotion from the corporations,” he says.

“We also license McDull movies overseas so that the films can reach international audiences.”

Through licensing, brands have a chance to introduce themselves to new markets, creating recognition even if the main product isn’t sold in the market.

“Now there are hundreds of Jeep apparel counters for both male and female customers. By licensing a brand out to different industries, the brand will have greater exposure and increasing popularity, while the licensing fee can also bring substantial income to the brand owner.”

The Asian Licensing Awards celebrate excellence, innovation and creativity across the licensing spectrum. Gregory So, secretary for commerce and economic development, HKSAR Government, and Raymond Yip, HKTDC deputy executive director, were among the esteemed guests at the ceremony. 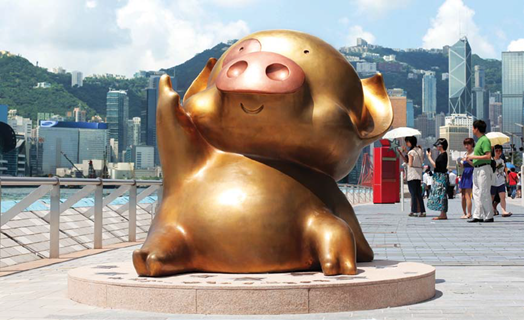 Beaming success — a McDull sculpture showcased at the Avenue of Stars in Tsim Sha Tsui. 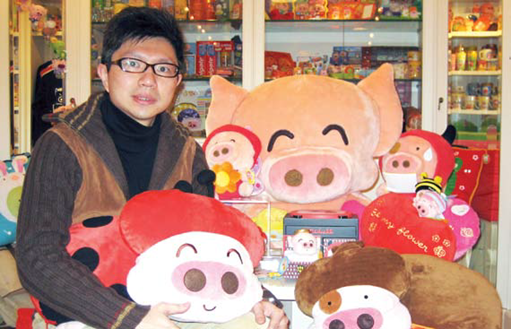