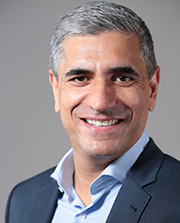 The Belt and Road Initiative, launched by Chinese President Xi Jinping in 2013, is a Eurasian strategy that seeks to boost economic growth by connecting maritime routes and land infrastructure networks all the way from the Chinese mainland through Asia and on to Africa and Europe. This will not only benefit the leading players of the initiative, but as Siddique Khan, CEO of Kerry Globalink Logistics believes, will also allow smaller economies, to reap substantial economic rewards.

Based in Kazakhstan, Siddique Khan will for the first time be attending the Asian Logistics and Maritime Conference organised by Hong Kong Trade Development Council. He will speak at the conference under the theme of “Belt and Road: Growth Engine Driving New Era for Global Trade.”

Khan points out that the Belt and Road initiative is nothing new in itself, saying, “When President Xi announced the initiative in 2013, it was more or less a consolidation of scattered programmes. But Xi’s input helped fast-track what we previously saw. In the last three years in particular there has been much greater results.”

In addition to across the board economic growth, he asserts that the initiative has a positive impact on smaller economies including Kazakhstan, Pakistan, Vietnam, and Cambodia, as well as small-and-medium sized enterprises (SMEs) due to of the ease of transport, increased connectivity and more direct trade. Khan says, “Chinese traders are coming closer to Western China which gives them access into Central Asia. Also, there will be a migration of SMEs because large scale enterprises are always in China. The initiatives are important to SMEs and they will be getting some economic benefits from this.”

He adds that, “When you look at Lanzhou, for example, in the Western China, it’s 2,000-kilometers’ distance from Southern China, and it’s almost the same distance from the Western China to Central Asia and Russia.” By increasing the connectivity across land, he believes that there will be more trade between Western China and Western markets. Khan further explains, “People were sceptical in the first or second year, but now in its fourth year, everyone has started taking this programme quite seriously.”

Khan believes that rail transport is one of the most cost-efficient and reliable transportation methods and plays a significant role in the Belt and Road initiative. “A train can take up to 44 containers which move at the same time and at a predictable speed. Compared to trucks, the cargoes are safer, especially since multiple trucks will not arrive at the same time.” The Chinese railway industry, as he explains, will reap the benefits as well, “In the last ten years, China has been exploring their rail technologies and has been producing everything from the tracks to the locomotives.”

In response to intensifying competition from the Chinese railway companies, two of the biggest European rail organisations, Siemens and Alstom, have merged to form Siemens Alstom. Khan expects the Belt and Road initiative to trigger more mergers and acquisitions. He states, “In the longer term, not only cargos, but more and more people would be travelling by rail from Western China to Central Asia and Europe.”.

The merger and acquisition activities are also found in the shipping industry. Khan confirms this by saying, “Cosco Shipping, for example, has acquired a lot of small carriers in the region and is now one of the world’s fourth largest carrier. The company has been building necessary infrastructure and establishing their hubs around the world including those in Greece and Sri Lanka.”

As he is also the CEO of Globalink Logistics, Khan points out that Kerry Logistics Network Limited has entered a joint venture with Globalink Logistics by forming Kerry Globalink Logistics with the aim of expanding its business coverage in Central Asia and the Commonwealth of Independent States (CIS). Khan says, “We’re going to offer multi-model products like combining rail by road in order to penetrate deeper into the regions which are not directly connected by rail or road.”

He also stresses that the role of technology plays an important part in the increasing connectivity among the regions especially for the tracking of cargo. “Our truck monitoring systems are able to trace and track cargo in real time, from Western China to Western Europe.” He adds that GPS systems have been installed into the containers themselves to ensure the safety of cargos by sending signals that project the estimated time of arrival. Khan adds, “More and more service providers are coming up with new solutions. It’s not only about transportation, but also safety solutions and procedures that can be offered to the sections of the market that are considering the options of land transportation between Mainland China and Western Europe.”

While all ASEAN countries have seen a lot of investments coming from the Chinese mainland as part of the Belt and Road Initiative, Khan finds it doubly exciting to see other countries, such as India, South Korea and Japan, establishing their own alternatives. “This is overall positive to regional economies while bringing about a higher degree of efficiency. In the past, India was not really interested in any global initiatives but now India has started working with Japan.”

Khan also highlights one of the biggest issues facing the participating countries, “Most of the economies in this region are not perfect and their legislative bodies are also yet well developed. Apart from building the rails and roads, it’s also important to enhance the soft infrastructure and the skills needed to do so.”

In order to gain the full economic benefits of the initiative, Khan believes that developments fundamentally depend on the eagerness in promoting free trade among the region’s various nations. He confirms this by saying, “Many of these countries do not really understand how to fully develop the economic benefits because they do not have well-developed infrastructure and neither do they have well established banking sectors, legislative infrastructure or even logistical industries.” Khan, adds that these countries need to maintain a balanced relationship with China in order get the full benefits offered in the Belt and Road programme. He adds, “Although China is filling the gap, such as providing funding through Chinese, local industries too often see this as competition from Chinese companies.”

To be able to see the initiative all the way through to completion, Khan advises that, “We have to engage in calculated risks and at the same time we have to be brave. You should have a vision. Most importantly, we should take into account the business opportunity and not to mix up the Initiative with politics.”

Khan will be flying to Hong Kong to join the Asian Logistics and Maritime Conference on 23 and 24 November. He concludes by saying, “Asia is our home and the region is very important to us. The Conference is a key industry event in Asia where I expect to connect with Asian businesses and to eagerly listen to their point of view concerning the Belt and Road Initiative.”